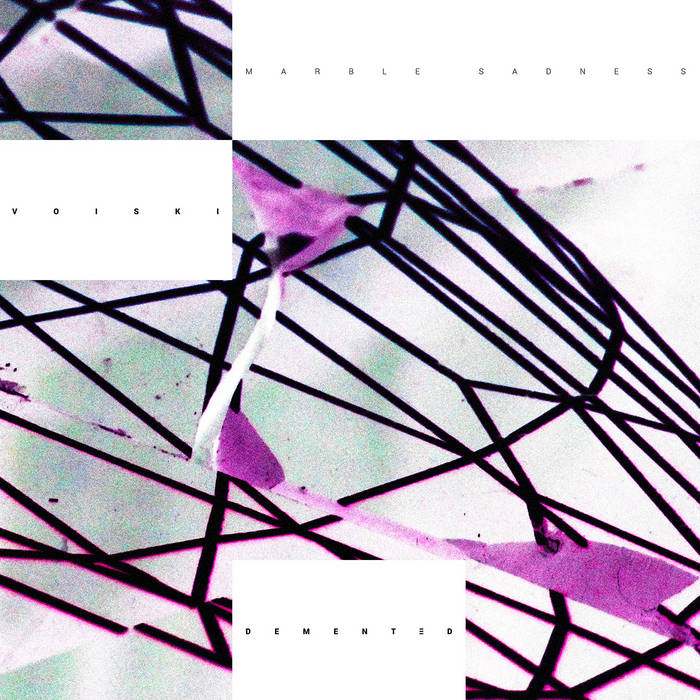 Krisztian Hofstadter 'Marble Sadness' is madness. All tracks great. This one is simply mesmerizing. 'Micro Mouse Mappy' is also great, ... then, '205 Colorline' is just simply demanding you to stay alert, this slight out 'of sync' is sorcery. Thanks! k Favorite track: Marble Sadness.

This record collects many intimate things and singular ideas about Voiski, it is also an excellent synthesis of his musical style, and how it is evolving towards a more and more unknown territory, where his "post-trance" idea collides classic Detroit influences, 90's techno (with that Underworld cover obviously) and a very unique sonic identity he has developed playing his synths with a bright and powerful sound design, and rich arpeggios.

We’re absolutely thrilled - Voiski’s very first EP on DEMENT3D should have happened years ago, and it’s finally hitting crates this february. We have to admit, that if it wasn’t for him, the label wouldn’t be what it is today ; both his inspiration and contribution have been absolutely crucial in the beginnings.
The wait has been long, but our patience has been rewarded with a very special record. There are quite a few stories to tell about it, as it relates to very specific experiences, objects and memories. It goes something like this:

First, picture a kid. In the nineties, there’s this awesome futuristic racing game called WipEout 2097, and he’s gotten quite good at it ; so good, that during the last lap, when he goes down the hills of Valparaiso at 450 mph, Underworld's “Tin There” soundtrack reaches its climax just as the last opponent appears in a distance. "Forty five seconds remain before the end of the track", everything is going faster, pressure is building up, but the kid plays like a machine would do, automatically.

Then, picture a boy in his early twenties. He’s just bought his first car. It's small, slow, uncomfortable, black, but not entirely : there’s a colored-line on its side, green and red ; and it's funny. Sometimes, to escape Paris on weekends, he drives, to hang out in Normandie, walks on the beach and collects stones.
Then a bit later, our boy is twenty six and studies arts. Among many things, he’s caught a disease that one could call an “obsession with Renaissance”. Ask him if you want to find out about sixteenth century Florentine marquetry. He spent three month on a Belgian black marble slab, built an inlay with a geometrical 3D model of the most perfect pebble-stone he ever found on a beach, inlayed with the rock itself smashed into small particles of sand. And the stone in the stone is the stone...

The art student is still a gamer, so when he's working on escherian perspectives, the old arcade video game Marble Madness stands out as a reference he wants to play deeper with. Alas, the idea of dropping a huge Lapis-Lazuli ball and break it to pieces (the same way you would lose in the game) never made it out into the light and Marble Sadness was kept aside.

Kids grow up so fast. Our man his making music now, and the name of that old sleeping project popped in again. Marble Sadness had been the title of one of the tracks for this EP, since quite a long time, but as we were talking about covers and the title for the record, the beloved black marble slab fell off the wall and broke into thousand of pieces scattered all across the floor.

What you see on the cover are distorted photos of Voiski holding those broken pieces in his hand. The picture’s colours have been inverted but they originally come from the reflection of his vinyl collection on the shiny marble. Both image and graphic design are once again the work of our favorite designer - Matthieu Cannavo - (who Luc met in art school by the way) and who has been doing all of our covers since the label’s first releases.